Maury Braunstein: A divine story
By Alfred Sheinwold
Reprinted from The Bulletin (8/89)

Only a few hundred experts have ever heard of Maury Braunstein. A few thousand more may recall a short, trim man directing top championships for the ACBL and the WBF.

When friends celebrated Braunstein’s 74th birthday during the World Team Olympiad in Venice in 1988, there was much talk about his closet full of bow ties. I think of him as the hero of a divine story.

Years ago, Braunstein noticed that the players at one table hadn’t moved to take their seats for the new round of play. Braunstein hurried to the sluggish table, saw from the uncompleted score slip that the contract was 7♥ and noticed that not a card had been played except for the opening lead.

Braunstein waited for a few seconds and coughed warningly at dummy and declarer, two Catholic priests who often played as partners in those years. When his cough and stern stare had no effect, Braunstein spake:

“Our fathers, who art in seven, hurried be thy game.”

Everybody smiled and declarer showed his hand and said, “All right. I’ll draw trumps and try the diamond finesse.”

“Down one,” East replied, showing the ♦K.

“Score it up,” Braunstein flung at them over his shoulder as he briskly walked away.

The next day Braunstein showed me the N-S cards and asked how I would play 7♥, but I already knew the full deal. “The slam is cold against any defense,” I proclaimed oracularly. “The opening lead must be from the J-10. It couldn’t be from J-x or from the king, because nobody makes such leads against a grand slam.”

“So the slam is unbeatable no matter who has the ♦K. He’d have made it, too, if you hadn’t rushed him.”

“That’s the trouble with all you writers,” Braunstein complained. “Always expecting miracles.”

If you haven’t worked out how to make the grand slam against any defense, take another minute. Then read the rest of the column and see if I’ve got it right.

South takes the ♠A and five rounds of trumps, discarding dummy’s ♦Q! He then runs four clubs, ending in dummy. South keeps a trump and two diamonds. Dummy has the ♠Q 9 and the ♦A.

If East keeps two diamonds, he can save only one spade – the king. Declarer then leads dummy’s ♠9 to ruff out the king, and dummy wins the last two tricks with the ♠Q and the ♦A.

To prevent this, East must save two spades and only one diamond.

If West keeps two diamonds, he can only save one spade – the 10. Declarer then leads dummy’s ♠Q to ruff out East’s king and pick up West’s 10. (If East fails to cover the ♠Q, South discards a diamond.)

To prevent this, West likewise must save two spades and only one diamond.

But now declarer cashes the ♦A and wins the last two tricks with the last trump and the last diamond.

Incidentally, East knows North has the ♦A for his 4♦ cuebid. When North later bids 5♦, East must double to suggest a diamond opening lead. Even if East doubles 7♥, West may work out the killing lead.

If West opens a diamond, South can only take 12 tricks. The grand slam depends on keeping the ♦A in dummy for the three-card ending.

Maurice (Maury) Braunstein (1914-1997) of Schenectady NY was a leading director at the national and world level. He had a tireless devotion to players’ needs, an incredible wit and an incisive knowledge about anything that could happen at the bridge table. In 1954 he gave up his career as a promising bridge player to become a tournament director. He quickly rose to the top of his profession by becoming a national tournament director in 1968, right after he retired from his post as computer processing director for the state of New York. He was named the chief director for the Bermuda Bowl in 1973 by the WBF. From that point on he was either the head director or chief assistant at all world championships until he retired in 1988. He originated several duplicate movements, including the Stanza Movement. Braunstein was known worldwide for his bow ties which became his trademark at tournaments everywhere. 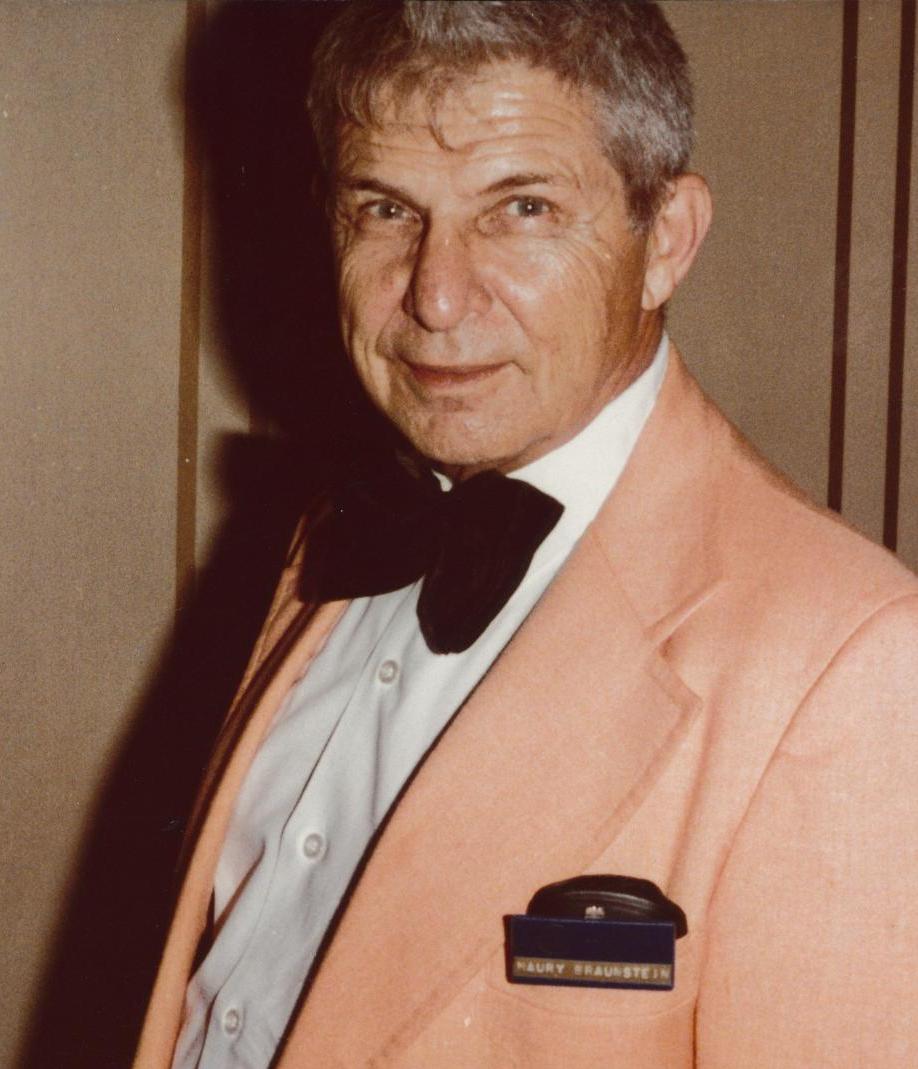