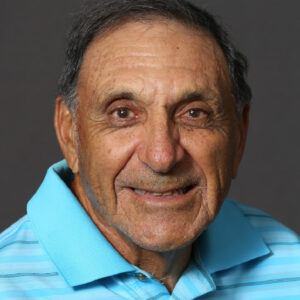 West leads the ♦A. East encourages, but West shifts to the ♣K. You decide to duck this trick as it will rectify the count for possible squeeze endings. East plays the ♣8. West then shifts to a trump, East following. Take over.

Draw as many trumps as necessary, discarding diamonds from the table, and lead a heart. If the ♥K holds (or if West goes up with the ♥A and gets out with a heart to dummy’s king), ruff a low club to get back to your hand. If East follows with a low club, you know that West started with six clubs and a stiff diamond, so then it is only a question of using the number of spades West started with to ensure this contract against any distribution.

It’s remotely possible that West started with one spade, but this is far and away the most unlikely distribution as it would place West with ♣K Q 10 9 x x and ♥A J 10 9 x. That would give East a singleton heart, and he would have given suit preference at trick one. In any case, your play is the same once you determine that West started with four or five hearts. Let’s say West started with two spades and therefore four hearts.

After the ♥K holds, ruff a club, which leaves you with one trump if spades were 4–1 or two trumps if they were 3–2. In the latter case play another trump leaving this forced end position:

You need four of the last five tricks, but you only have three. Three becomes four, however, when you lead your last spade.

What if West started with a 4=2=1=6 pattern? Play two rounds of trumps ending in dummy, ruff a low club and draw the remaining trumps. Then lead a heart. West, with ♥A x (and knowing you know he has A–x), does best to win the ♥A and exit a heart to dummy’s king. (Better than ducking and then getting thrown in with the ♥A and being forced to lead a club from the queen staring at the A–J in dummy!)

After winning the ♥K, play the ♣A, discarding a diamond, and ruff a club, leaving dummy with ♥Q x and a diamond. You have a winning spade, a low heart and a low diamond. This time it is East’s turn to get squeezed. East has two hearts and a winning diamond. When you play your last spade, discarding a diamond from dummy, East has no answer. The diamond discard sets up your tiny diamond, and a heart discard allows you to take the last two heart tricks.

The idea is to avoid the kiss=of-death minus 200. As East would be unlikely to be doubling with the ♥K under the bidder, it is reasonable to assign West the ♥K and perhaps the ♥J as well, East having the balance of the high cards including four diamonds. In so many words, forget heart establishment.

What you are going to have to hope for is to find East with ♠A K J, and even then you have to time the play properly. Start by winning the ♦K and running the ♠6, playing low whatever West plays. If East has the expected ♠A K J, he will win the trick and exit with the ♦J to dummy’s queen, West discarding a club. (If East somehow had the ♠A K 10, West would have to make the neat play of the ♠J from the J–9–8–3 to prevent East from winning the trick.)

Now that you are in the dummy, the idea is to ruff spades before hearts. Ruff a spade, cash the ♥A, ruff a heart, and ruff another spade, presumably setting up the ♠Q 7 with only one lower spade outstanding.

You have now arrived at this six-card end position, having taken six tricks and needing three more:

You ruff a heart in dummy and say East overruffs. No matter how East plays, you must take two more tricks. Nor does it do East any good to refuse to overruff. You play the ♠Q, and must come to two more tricks.

If East had a third heart in this ending with one less club, you would be able to ruff a third heart safely, your seventh trick, and play the ♠Q. Once again, East has no answer.